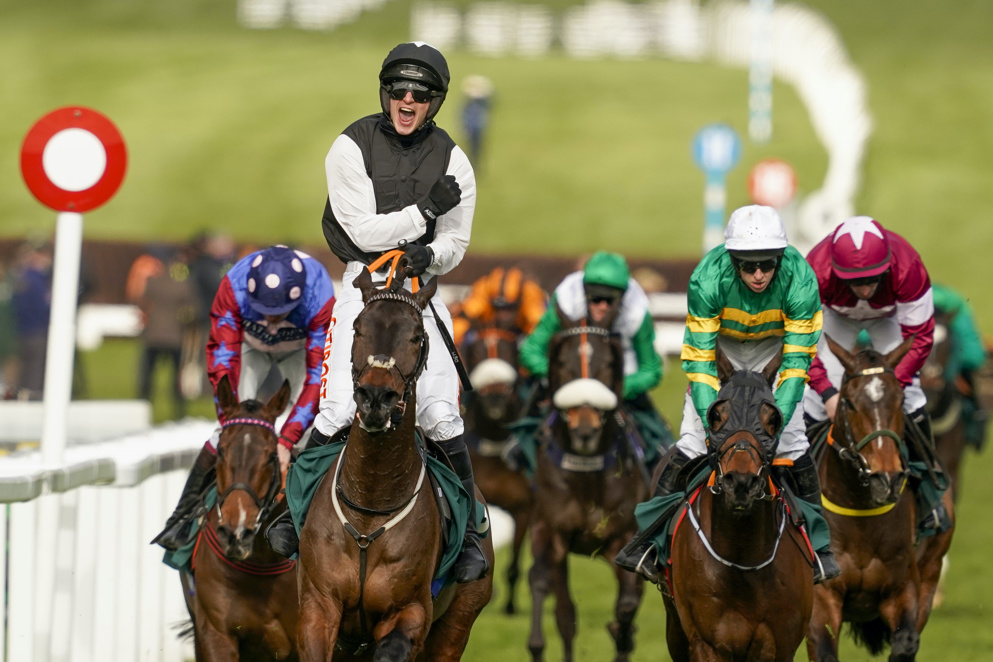 Can Flooring Porter make it three Stayers' Hurdles in a row?

There are some surprising names still left in the 28 entries for the Stayers' Hurdle, particularly the name of star 2 mile chasing veteran Chacun Pour Soi for Willie Mullins. The master of Closutton is not averse to making multiple entries for the Festival, and has also thrown in last season's Ballymore hero Sir Gerhard. The betting is wide open for the contest and here we take a look at some of the star names who could take their chance...

After his Prestbury Park exploits the last couple of Festivals, it would be wrong to start anywhere on this list of 28 other than with Flooring Porter. Gavin Cromwell's stable star has led them all a merry dance under the masterful Danny Mullins from the front the last two seasons and although he is yet to win this campaign, cannot be discounted. Available at as big as 8/1 in some places he could look a value play to many with his brilliant Cheltenham record, but the current favourite is a horse that has toppled him already this season in Home By The Lee.

Well beaten in last season's stayers at 33/1, eventually finishing sixth, Home By The Lee has looked a horse reborn this campaign. He has beaten both Flooring Porter and Bob Olinger, a horse entered in the 2023 Champion Hurdle not the Stayers', twice this campaign, first when springing a big surprise at Navan in the Lismullen Hurdle and then in the Christmas Hurdle at Leopardstown. Beating your rivals once could be seen as a fluke, but doing it twice fair and square surely means he's earned his spot atop the odds lists.

Blazing Khal has an entry despite not being seen for over a year for Charles Byrnes. He's looked a serious prospect in all three starts over obstacles, particularly when twice dismissing Gelino Bello at Cheltenham in late 2021. The absence is of course a worry but the updates have been cautiously optimistic and racing fans can look forward to seeing him back either in a prep run or first time out in the Stayers'.

Klassical Dream is a seriously untrustworthy horse, but on his day he is high class. He won the Supreme at the 2019 Cheltenham Festival from the front and tried to do the same last year in the Stayers', but was no match for Flooring Porter and weakened into fifth. After starting as the 11/4 favourite this was a poor return but with another year's experience he could put up a better fight in 2023. Teahupoo is interestingly entered in just this race and not the Champion, which shows the confidence Gordon Elliot's team have in his stamina. The conqueror of Honeysuckle last time out, he is a very interesting proposition.

Arguably the best British challenger is the old legend Paisley Park for Emma Lavelle. Available at 14/1, he could be overpriced on this season's runs. His trademark flat spot and finishing rampage is a sight all jumps racing fans love at this point and the roof would come off at Cheltenham were the 2019 champion to regain his crown three years on. Maries Rock looked as good as ever on her reappearance and would have a cracking chance for this race, but she is by no means a certain runner with a defence of her Mares' Hurdle crown seen as the more likely route. Sir Gerhard hasn't been seen yet this season and any plans for novice chasing must be fading by the day. He has never looked like 3 miles would cause him an issue and were he to line up, the 16/1 would be long gone.

Willie Mullins has a trio of fascinating runners behind Sir Gerhard in the market, firstly with nutcase Asterion Forlonge, who all other connections will be praying doesn't turn up. He is a law unto himself but talented on his day. Next are a duo of Rich Ricci owned geldings with superb form in the locker but plenty to prove. Chacun Pour Soi would be fascinating over this trip and these obstacles, but his participation is long odds against, while 2020 RSA winner Monkfish could make his long awaited return in this race and if running as well as he did in the 2019 Albert Bartlett off a massive layoff would not be out of the equation.

Further down the list, 2020 Triumph heartbreaker Goshen is in at 33/1 and still keeps his entry but surely is no antepost play, while Langer Dan is a massive price at 100/1 for the Skeltons judging by his form at Cheltenham 2021 and Aintree 2022, although handicaps may beckon for that one.