The Week In Racing: How Social Media Reacted To Palace Pier's Lockinge Win And A Whole Lot More 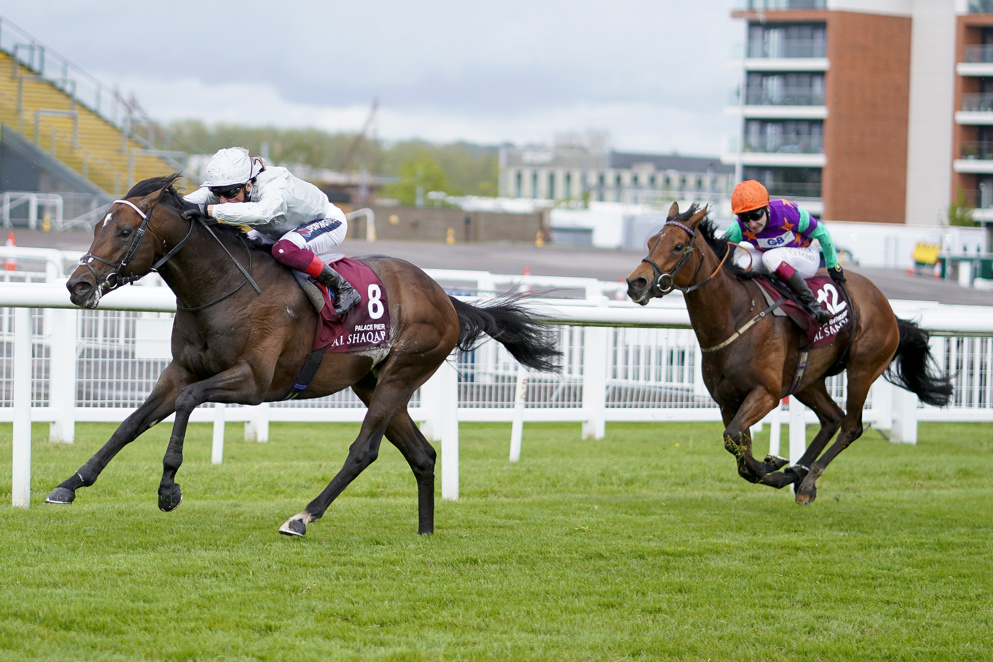 We take a look at how social media has reacted to all the big racing stories over the last seven days.

The star performer of the week was unquestionably Palace Pier, who sauntered to a stunning victory in the Lockinge Stakes at Newbury, as the John Gosden-trained four-year-old cruised to a mightily impressive Group 1 win at the Berkshire track. Slashed into odds-on for the Queen Anne Stakes at Royal Ascot next month, Palace Pier's performance certainly impressed his ever-growing set of fans.

Palace Pier is some star!

Palace Pier is a fantastic animal, he has such a beautiful pedigree too

A stellar card at Newbury at the weekend not only saw Palace Pier put in an A1 display, but the William Haggas-trained Al Aasy was a dominant winner earlier in the afternoon in the Group 3 Al Rayyan Stakes. But, while the Coronation Cup at Epsom looks to be the next port of call for the son of Sea The Stars, could there be European glory at the end of the season? Haggas was certainly ebullient in the aftermath of his star's four-length win.

"We never get them off the bridle at home. He always looks like Nijinsky against the others!"

William Haggas on Al Aasy, the apple of his eye and now all set for the Group One Coronation Cup @NewburyRacing @EpsomRacecourse https://t.co/nuCyaXBBTR

Al Aasy, wins the Coronation Cup at Epsom, King George at Ascot then the Arc. All hard on the bridle too.

Choux Wouldn't Have Believed The Gamble At Thirsk On Impressive Newcomer

A minor maiden fillies' stakes at Thirsk on Saturday was to be one of the betting talking points of the last week, as the David Evans-trained Choux landed an almighty gamble, as the daughter of Exceed And Excel scooted to a one-and-three-quarter length success. As the filly paraded, she was around the 40/1 shot in the market, but in the ten minutes leading up to the race she was smashed off the boards, and was sent off the 100/30 favourite. A well calculated, late gamble was a thing of beauty for those punters who followed the money, as Choux won like a good thing.

Almighty gamble landed in the first at Thirsk! Choux backed into 10/3 from 40's and not a moments worry for his supporters. That's how to land a gamble 👏🏻

Jockeys Sam Twiston-Davies and Aidan Coleman got the leg up on some old stars of the National Hunt, as former Aintree Foxhunters' Chase winner Baby Run (now 21 years old) and two-times Becher Chase hero Hello Bud (now 24 years old) gave the lads a trip down memory lane. Check out Twiston-Davies and Coleman in this marvellous clip.

International Hurdle 2021 Odds as HorseRacing.net gives you an overview of the Ante Post Odds and a Runners Guide…

December Gold Cup 2021 Odds as HorseRacing.net gives you an overview of the Ante Post Odds ahead of the race at…

Cheltenham Gold Cup: Are there any clues from the Many Clouds or John Durkan?
By Steve Chambers

Cheltenham Gold Cup Contenders as HorseRacing.net assess whether the winners of the Many Clouds Chase or the John…

Detailed look at the Many Clouds Chase odds, tips and runners at Aintree on Saturday 4th December 2021.

The Weekend Wager: Raceolly's tips from Aintree and Sandown on Saturday
By Raceolly

#AD New customers only. Deposit £20 using card or Trustly. Up to your first £20 of losses will be refunded as CASH within 24 hours of qualifying bet having been settled. T&Cs apply
get offer
Bet £10 Get £30 In Free Bets
#AD 18+. Play Safe. New customers using Promo code H30 only, Min £10/€10 stake,  min odds 1/2, free bets paid as 2 x £15/€15, free bets credited after  settlement of first qualifying bet, free bets will expire 30 days after  the qualifying bet is placed, payment method/player/country restrictions apply.
Welcome Offer
#AD Open Account Offer. Up to £100 in Bet Credits for new customers at bet365. Min deposit £5. Bet Credits available for use upon settlement of bets to value of qualifying deposit. Min odds, bet and payment method exclusions apply. Returns exclude Bet Credits stake. Time limits and T&Cs apply. The bonus code ‘100BET365’ can be used during registration, but does not change the offer amount in any way. 18+ begambleaware.org.
Bet £10 Get £40 In Bonuses
#AD 18+ New customers only. Opt in and place a £10 bet on Horse Racing at odds of 2.00+ within 7 days of opening a new account; excludes cashed out bets. Receive 3x £10 Horse Racing Free Bets, valid on set events only at odds 2.00+. Plus, a £10 Slot Bonus, selected games, wager 20x to withdraw a max of £250. Bonuses expire in 7 days. Card payments only. T&Cs Apply. Please Gamble Responsibly.
Bet £10 Get £30 Free Bets + £10 Casino Bonus
#AD Minimum deposit of £10 using deposit code 30F - A qualifying bet is a ‘real money’ stake of at least £10 placed on any sports market - Minimum odds of 1/2 (1.5) - Free bets credited upon qualifying bet settlement and expire after 7 days - Free bet stakes not included in returns - Casino Bonus must be claimed within 7 days • To withdraw bonus/related wins, wager bonus amount x40 within 14 days • Wagering req. vary by game • Withdrawal restrictions and Full T&C’s apply. 18+ begambleaware.org
Bet £10 Get £30 + 30 Free Spins
#AD New UK & NI customers only. Promo code SPORTS60. Deposit and place first sports bet of £10+ in one transaction, at odds of Evens (2.0)+, settled within 7 days of registration. First bet must be on Sports. £30 in Free Bets credited within 48 hours of bet settlement. 7-day expiry. Payment restrictions apply. SMS validation may be required. Max 30 Free Spins on Blue Wizard at £0.10 per spin. 7-day expiry. Full T&Cs apply.
Bet £20 & Get It Back As CASH If It Loses
#AD New customers only. Place your FIRST bet on any Football market and if it loses we will refund your stake in CASH. Max refund for this offer is £20. Only deposits made using cards will qualify for this promotion. T&Cs apply.
Get Up To £100 In Free Bets
#AD New customer offer. Place 5 x £10 or more bets to receive £20 in free bets. Repeat up to 5 times to receive maximum £100 bonus. Min odds 1/2 (1.5). Exchange bets excluded. Payment restrictions apply. T&Cs apply.
Bet £10 Get £20 In Free Bets
#AD. New members. £10 min deposit & bet on sportsbook, placed & settled at 1.5 min odds within 14 days of sign-up. Win part of E/W bets. 2 non-withdrawable £10 Free Bet Tokens: accept in 7 days, valid for 7 days from acceptance (ex. E/Ws & Multiples), stakes not returned. Click here for Rules & Exclusions. Bet Responsibly. BeGambleAware.org. 18+
Bet £10 Get £20 In Free Bets
#AD Min stake £10. Min odds 1/2 (1.5). First bet only. Free bets expire in 7 days. Cashed out bets won’t apply. Payment method restrictions. Online UK customers only. 30 days to qualify for £20 in Free Bets. 18+. T&Cs apply
£25 Free Bet + 10 Free Spins
If your account has Sportsbook losses at the end of your first day's betting, QuinnBet will refund 50% of your losses as a Free Bet up to £25 (min 3 bets) Plus 10 Free Spins on Asgard Warriors. Even if your account is up, you're guaranteed a £5 Free Bet Plus 10 Free Spins provided you place at least 1 bet of £10 or greater at the minimum odds. T&Cs apply | 18+ New UK Customers Only | BeGambleAware.org
£10 Welcome Offer
#AD UK & ROI customers only. 18+. Place your first bet on sports pools and if it loses we’ll refund your stake in cash. Max refund is £10. Qualifying bet is the first sports pool bet added to the betslip. Ten to Follow bets do not qualify. Totewin will be the qualifying bet when a Totewin and a Toteplace bet are struck at the same time. BeGambleaware.org T&Cs apply
Latest racing results
Southwell
19:30
Full Result
1st Redzone
5/2 F
2nd Capla Spirit
20/1
3rd The Thin Blue Line
4/1
Southwell
19:00
Full Result
1st Wineglass Bay
11/8
2nd Yantarni
11/10 F
3rd Teumessias Fox
11/1
Southwell
18:30
Full Result
1st True Warfare
9/1
2nd Love Mystery
5/2 F
3rd Rogue Star
11/1
View All Today's Results