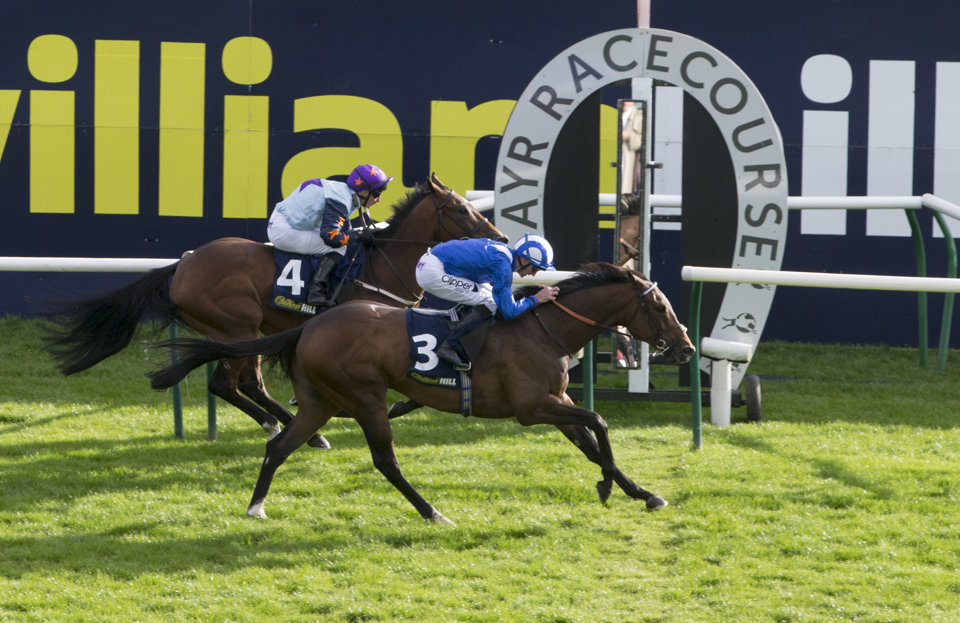 It looks it could be testing ground at Ayr this afternoon

Introducing the first of our new daily feature highlighting the things you need to know for today's horse racing!

1. Irish trainers targeting races at Ayr is nothing new, and with the ground certain to be testing there today it could be a perfect opportunity for County Tyrone-based James Lambe's Rattling Jewel to make it two victories in as many runs, as he tries his luck in the six furlong sprint at 2.20pm. The hardy seven year old popped up with a 14/1 success at Listowel 18 days ago, meaning four of his five career turf wins have come on either Soft or Heavy going. Apprentice Gavin Ryan keeps the ride, one of two mounts for him on the card.

2. Sticking with a similar theme, the County Meath stable of John McConnell is represented in the 4.20pm race at Ayr by the four year old Sagittarius Rising. Yet to score in four starts for his current team, he was denied by just a neck last time out, ironically by none other than Rattling Jewel. Expect his price to shorten if Rattling Jewel franks that form by scoring earlier on the card.

YOUNG FIRE displayed a good attitude to win on his third start in the UK at Haydock just under a month ago, and David O'Meara's four-year-old could have more to offer off a 3lb higher mark. Redarna bounced back to form when runner-up over C&D and he warrants plenty of respect along with Sagittarius Rising, who travels over from Ireland after finishing a neck second in a Listowel handicap.

521172
2 Naps
3 Tips
Redarna 10
Jockey
Paul Mulrennan%
Trainer
Mrs Dianne Sayer %
Age: 5
Weight: 9-10
Has won eight races from 7f to 1m on ground varying from good to firm to soft. Beaten a neck by Wise Counsel when second of 11 at 11-1 on his latest outing over this course and distance (good) last month. Has won 3 times this season.CD.
OR: 90, RPR: -, Topspeed: -
Tipped By:
The Sun
Templegate
Naps:
Daily Mail
Robin Goodfellow
sportinglife.com
12(4)

321252
1 Tip
Quirky Gertie 1
Jockey
J P Sullivan%
Trainer
M R Channon %
Age: 3
Weight: 8-4
A winner at 7f on soft ground. Finished 5l behind Eye Of The Water when fifth of 14 at 9-1 on her latest outing at Windsor over 6f (good) in August.D, LT.
OR: 72, RPR: -, Topspeed: -
Tipped By:
LAMBOURN
James Burn
Reading the racecard:
• 1 (5) = Horse number with the draw number in brackets.
• Number alongside the horse name is the days since the horse last ran.
• Numbers/letters under the jockey silk is the horse form with the most recent figure on the right. Numbers = finishing position (0 = finished outside the top 10), P = pulled up, F = fell, U = Unseated, B = brought down, R = refused, C = carried out, D = disqualified, HR = hit rails, L = left at start, O = ran out, S = slipped up, V = void race. A dash between figures indicates a year between the runs and a slash indicates a new season.
• % alongside jockey/trainer names = strike rate in last 30 days.
• Key to pointers: C = Course winner, D = Distance winner, CD = Course & Distance winner, BF = Beaten Favourite last time out, WS = Has had wind surgery since last run, LT = Longest Travellers, b = Wearing blinkers, b1 = Wearing blinkers for the first time, h = Wearing a hood, h1 = Wearing a hood for the first time, t = Wearing a tongue strap, t1 = Wearing a tongue strap for the first time, v = Wearing a visor, v1 = Wearing a visor for the first time, p = Wearing cheek pieces. OR = Official Rating. RPR = Racing Post Rating. Topspeed is a figure calculated using race times and the going to show how fast the horse can run.
Bet 50p to watch the race at

3. Eight winners in the past 14 days point to the good form of the Newmarket stable of Roger Varian. He'll be hoping for continued success on the all-weather at Kempton Park this evening with Revolutionise bidding to make it two course and distance victories in the space of 25 days as the grey goes in the 7.40pm race. A son of Lope De Vega, he comfortably took care of nine rivals over six furlongs here last month and will be full of confidence following that display.

4. Make a note of the name Justin Landy. A small scale trainer based in Leyburn, North Yorkshire, his eight winners from 23 runners to date represent a 35% career strike-rate. His runners are few and far between from his small string, but respect anything he sends out, including stable debutant Trapper Peak in the fourth race on the card at Southwell. On a hat-trick after winning both his last two starts for his previous stable, it'll be fascinating to see what Landy can do with this 10 year old Westerner gelding.