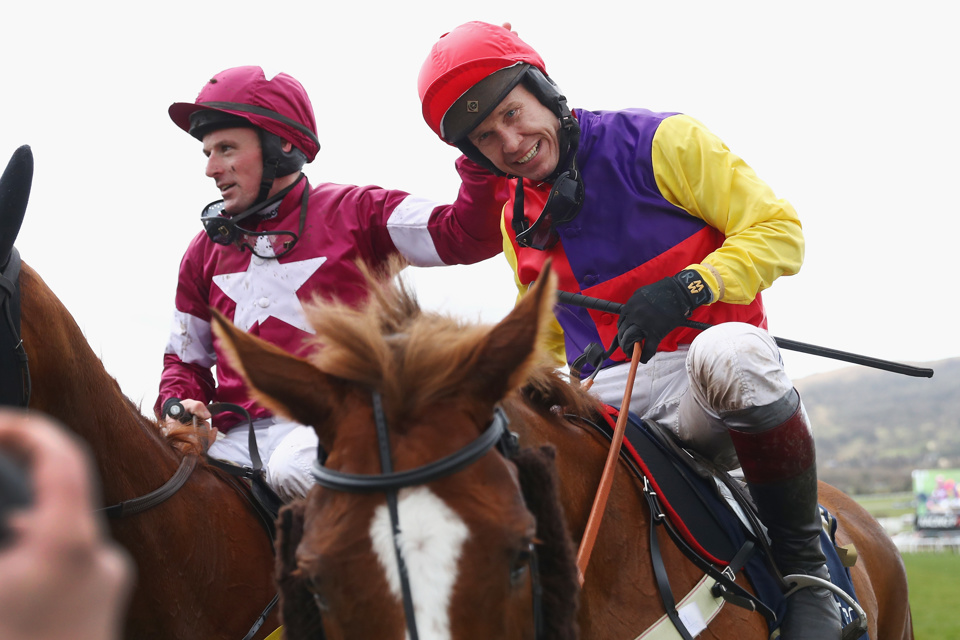 Native River outclassed his rivals to win a third Denman Chase at Newbury on Saturday.

Colin Tizzard is confident that there will be more to come from Native River in next month's Cheltenham Gold Cup, as he stepped up his Festival preparations with a game success in Saturday's Denman Chase.

This is the tried and tested route to the Cotswolds for Colin Tizzard’s star performer, and the 10-year-old became the first three-time winner of the Berkshire track’s Grade 2 Denman Chase, making all to score by the best part of three lengths under Jonjo O'Neill Jr.

The 2018 Gold Cup winner quickly saw off the challenge of old foe Might Bite, and it was Paul Nicholls’ Secret Investor who gave the nose-banded stayer most to think about in the latter stages. However, the 12-time winner under Rules was not for passing and his young rider only had to give him the minimal of urgings for him to quicken up and put the race to bed.

O’Neill Jr, who recorded his first Festival victory when aboard Early Doors in March last year, was delighted to get his association with the horse off to a winning start.

He said: “Without a doubt he’s the best horse I’ve ridden in my career so far. It's a pleasure to ride a horse like that, I've been really lucky to get the ride on such a wonderful horse and it's nice to reward Colin and the owners for putting that faith in me.”

The young jockey was also keen to thank Richard Johnson, for whom he was deputising for on the day, and who he expects to be back in the saddle come March.

He added: “I think Richard (Johnson) will be back for Cheltenham, but it’s nice to get the call to be a substitute for him and Dicky was very helpful in making sure I got the tactics right. He’s a very straight forward horse, but he told me every single thing I needed to know about him," concluded O'Neill Jr.

He takes the Betfair Denman Chase at @NewburyRacing!

His handler Tizzard was just as glowing in his assessment of the horse that landed him the biggest prize in the sport two years ago.

The Dorset man said: “He was staying on at the end, right to the line and another few furlongs in the Gold Cup he'll be even better. He's in good form with himself, that's Native River, we've seen him back strutting, doing what he does best.”

And when asked if what he saw on Saturday increased his hopes of a second victory in the Festival’s Friday feature, Tizzard enthusiastically added: “He went from here to winning a Gold Cup two years ago, so everything is fine. Why not!”

Native River also holds an entry in the Grand National, where the horse’s forward-going nature and sure-footed jumping would be a sight to behold over Aintree’s signature fences.

Tizzard remained coy on the idea, saying: “It'd be lovely to see him in the race, but the owners have to be convinced.”

However, Tizzard was quick to voice his concerns about the proximity of the Cheltenham Festival and Aintree's Grand National meeting this year, with only 22 days separating the Gold Cup and the Grand National.

“It's amazing that Aintree is just three weeks after Cheltenham. I can't understand why? It means every horse that goes Cheltenham could struggle to go to Aintree. So why would they do. The biggest festival is Cheltenham, then the next biggest is Aintree and there only three weeks apart. Surely you can have a longer gap," explained a perplexed Tizzard.