Today's Horse Racing Tips: Sunset to Breeze to victory at Goodwood on day two of Festival 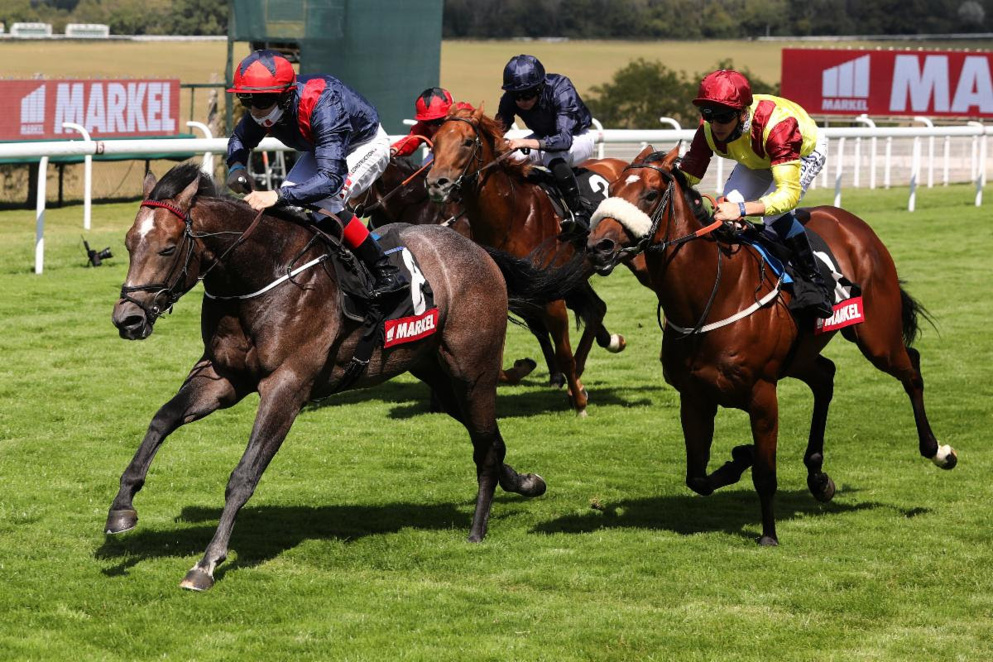 Yet another dose of rotten luck yesterday when three of my four selections were withdrawn due to the softening of the ground. The only one to run, Sunday Sovereign – advised at 16/1, ran well enough to finish fourth.

There are three bets for the second day of the Qatar Goodwood Festival.

Godolphin’s SISKANY (1 point win bet at 4/1) finished fifth on his racecourse debut and has won three of his four races since. He readily pulled clear of his rivals over 1m2f at Sandown two starts back and as that came on soft ground, today’s conditions should very much be in his favour. His fourth-place finish at Royal Ascot last month was a career best effort and can be upgraded given that plenty went wrong for him in the race. That confirmed his ability to stay this 1m4f trip and plenty more improvement is likely. He is one of three runners to hold an entry in the Group 2 Great Voltigeur Stakes at York, and James Doyle takes over in the saddle. Annandale, a consistent performer for Mark Johnston, and Pied Piper, who represents top connections, complete the shortlist.

Bounce The Blues and Highfield Princess have leading claims but at a much bigger price, I am taking a chance on LULLABY MOON (0.5 point each way bet at 25/1), who is one of three in the race for trainer Ralph Beckett. She has been well beaten in her two starts this year, but they have been over a mile in Group 1 company at Longchamp (French 1000 Guineas) and Ascot (Coronation Stakes). The drop in both class and distance can allow her to return to the kind of form she showed last season when landing the Listed Two Year Old Trophy at Redcar and a Group 3 in France. Those efforts followed on from two victories here at Goodwood, so she is proven on the track. She also relishes testing ground and has a decent chance at the weights.

The Sir Mark Prescott-trained SUNSET BREEZE (NAP - 1 point win bet at 11/2) can defy 9-13 and land his fourth career victory. Tenth in the Victoria Cup at Ascot on his seasonal reappearance, he disappointed at Haydock next time out but was beaten by just a short head at Newcastle 32 days ago. That should have set him up nicely to build on the progress he made last season when he recorded impressive form figures of 111622. With form on soft ground, conditions shouldn’t be a problem and he can take advantage of a drop in class under regular jockey Luke Morris. The blinkers that were worn for the first time at Newcastle are retained, and he should be able to gain a prominent position from a middle draw (stall 11). The biggest dangers are Internationaldream and Epic Endeavour.

#AD New UK customers (Excluding NI) mobile only. £30 in FREE Bets (FB) as £20 in sports bets & a £10 casino bonus (CB). Min stake £10. Min odds Evs. FB applied on 1st settlement of any qualifying bet. FB 7 day expiry. 1 FB offer per customer, household & IP address only. Payment restrictions. 14 days to accept £10 CB, then active for 3 days. CB 5x wagering & max redeemable £100. Game restrictions apply. Cashed out/Free Bets won’t apply. 30 days to qualify. 18+. T&Cs apply
get offer
Bet £10 get £30 in Free Bets
#AD New customers on mobile only. 7 days to claim and stake £10 minimum bet at odds of 1.5 or greater to qualify. Free, void, cashed out or partially cashed out bets do not qualify. Max 3x £10 free bets credited on bet settlement. Free bets must be used on 4 or more selections with selection odds of 1.3 or greater. Free bets are non-withdrawable, and stake not returned with winnings. 7 day expiry. 18+BeGambleAware.org. T&Cs apply.
Double the odds, any sport, any bet, any odds!
#AD 18+ begambleaware.org Only valid for new registrations to Grosvenor Existing members do not qualify, Bet must be placed using real money in combination with the Odds Boost Token, Offer applies to Sport bets only. Max stake is £10. Each way bets are a maximum of £5 each way (£10 total). Customers have 60 days after registration to use the Odds Boost token. T&Cs apply.
Bet £20 & Get it Back As CASH If It Loses
#AD New customers only. Place your FIRST bet on any Horse Racing market and if it loses we will refund your stake in CASH. Max refund for this offer is £20. Only deposits made using cards will qualify for this promotion. T&Cs apply.
Welcome Offer
#AD Bet £10 & Get £50 in Free Bets for new customers at bet365. Min deposit requirement. Free Bets are paid as Bet Credits and are available for use upon settlement of bets to value of qualifying deposit. Min odds, bet and payment method exclusions apply. Returns exclude Bet Credits stake. Time limits and T&Cs apply. The bonus code SPTS365 can be used during registration, but does not change the offer amount in any way.
Bet £10 Get £30 In Free Bets
#AD 18+. Play Safe. New customers using Promo code R30 only, Min £10/€10 stake,  min odds 1/2, free bets paid as 3 x £10/€10, free bets credited after settlement of first qualifying bet, free bets will expire 30 days after the qualifying bet is placed, payment method/player/country restrictions apply.
Bet £20 & Get it Back As CASH If It Loses
#AD 18+ begambleaware.org Max £20 refund on first bet. Bet must be placed in first 7 days of account opening. Only deposits made via Debit Card will be eligible for the promotion. T&Cs apply.
Bet £10 Get £60 in Bonuses
#AD New UK customers only. Register using the promo code BETFRED60, deposit and place first bet of £10+ on Sports (cumulative Evens+) within 7 days of registration. First bet must be on Sports. £20 in Free Bets to be used on Sports, £10 in Free Bets to be used on Lotto and 50 Free Spins (20p per spin) credited within 48 hours of bet settlement. Further £20 in Free Bets credited 5 days after settlement. Bonuses have a 7-day expiry. Payment restrictions apply. SMS verification and/or Proof of I.D and address may be required. Full T&Cs apply.
Bet £10 Get £30 Free Bets (APP Only)
#AD New UK, IE & Malta customers only. 18+. Min £10/€10 first deposit using Debit Card or Trustly. Place a bet of £10 at min odds of 1.5. Free bets expire in 90 days. Full T&Cs apply.
Bet £10 Get £30 Free Bets + £10 Casino Bonus
#AD Minimum deposit of £10 using deposit code 30F - A qualifying bet is a ‘real money’ stake of at least £10 placed on any sports market - Minimum odds of 1/2 (1.5) - Free bets credited upon qualifying bet settlement and expire after 7 days - Free bet stakes not included in returns - Casino Bonus must be claimed within 7 days • To withdraw bonus/related wins, wager bonus amount x40 within 14 days • Wagering req. vary by game • Withdrawal restrictions and Full T&C’s apply. 18+ begambleaware.org
Bet £10 Get £30 Free Bets
#AD Offer includes a free £1 Race Index spread bet to try out our exciting 50-25-10 race markets. Place a £10 fixed odds bet at minimum odds of 1/2. Get 2 x £10 free fixed odds bets + 2 x £5 free Winning Favourites spread bets. Bet with live streaming on all racing and greyhounds! Ts&Cs Apply. 18+ begambleaware.org
£35 Free Bet + 10 Free Spins
If your account has Sportsbook losses at the end of your first day's betting, QuinnBet will refund 50% of your losses as a Free Bet up to £35 (min 3 bets) Plus 10 Free Spins. Even if your account is up, you're guaranteed a £5 Free Bet Plus 10 Free Spins provided you place at least 1 bet of £10 or greater at the minimum odds. T&Cs apply | 18+ New UK Customers Only | BeGambleAware.org
50% Up To £50 Welcome Bonus
#AD 18+ begambleaware.org; New bettors get 50% of deposit up to £50; Once per household; Min deposit £15 (no Skrill/Neteller); Wager a total of 8 times deposit + bonus, with max qualifying bet stake equal to your initial bonus amount; Bonus expires after 60 days; Min odds of 4/5 on singles, or 2/5 per leg for acca; Some bet types excluded; See full terms.
Latest racing results
Newcastle
19:15
Full Result
1stBlazing Son
11/4
2ndHighjacked
22/1
3rdWhiteandblue
20/1
Dundalk
19:00
Full Result
1stCapuchinero
6/1
2ndUn Bacio Ancora
18/1
3rdDiamondsinthesand
15/2
Newcastle
18:45
Full Result
1stAfter John
5/2F
2ndDeputise
11/1
3rdKraken Power
5/1
View All Today's Results