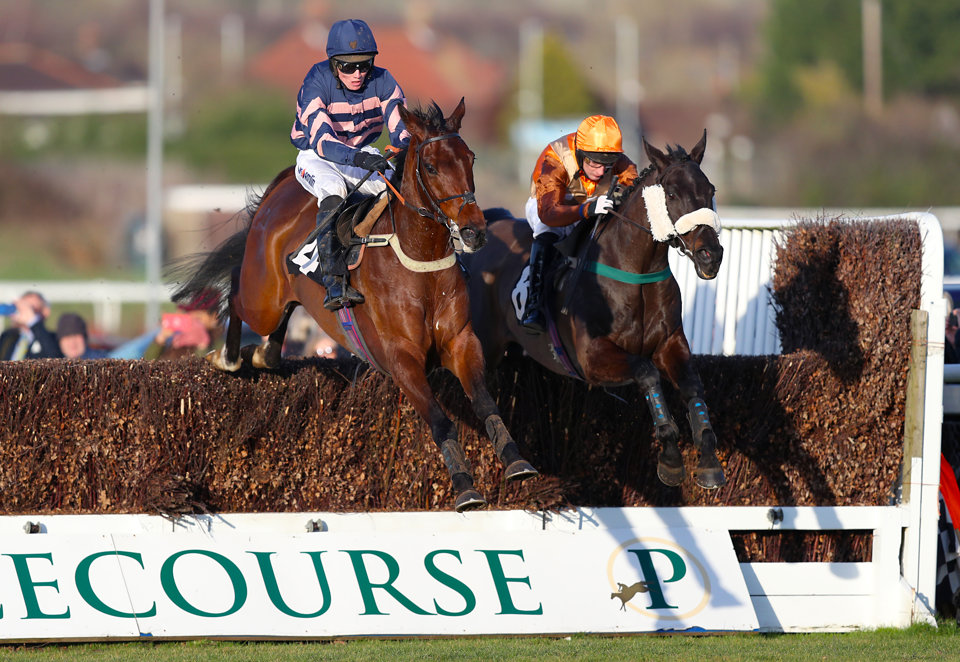 It looked like being another frustrating day with the fancied Geromino well beaten and Simply The Betts (advised at 10/1) finishing second. However, an inspired ride by amateur jockey David Maxwell ensured that 2022 got off to a good start as he steered Dolphin Square to a 28/1 victory. Fantastic scenes!

There are three bets for today’s racing at Plumpton.

The lightly-raced eight-year-old GO WHATEVER (NAP - 1 point win bet at 8/1) probably hit the front too soon over a shorter trip here last time out and ended up finishing third of the nine runners. He is likely to be held on to for longer today and trainer Chris Gordon has opted to replace cheekpieces with a first-time visor. He is yet to win in four outings over the larger obstacles but is rated 12lbs lower over fences and that’ll give him a really good chance off a weight of just 10-4 if he can build on his recent run. A six-length winner over hurdles at this course, he also won a decent handicap at Sandown before being placed in a valuable Grade 3 handicap hurdle. Stamina and ground conditions shouldn’t be an issue.

A chance is taken on two in the final race on the card: FRED BEAR (0.5 point win bet at 8/1) and WHITLOCK (0.5 point win bet at 20/1). Well beaten in novice company last time out, Fred Bear should be much better suited by this return to a handicap and is 1lb lower than when placed at Warwick in November. Softer ground is not necessarily in his favour but at just four years old, he has the advantage of a significant weight allowance.

The ex-Nicky Henderson-trained Whitlock has been completely overlooked in the market but first-time blinkers could spark a return to the form he showed when winning over this course and distance off a 1lb lower handicap mark back in May. Things haven’t gone to plan since but he did shape better when fourth at Ludlow last time out.

placed
8/1
Pulled Up
50/1
Today's Racing Tips
Horse Racing Tips: Doctor to down rivals at Ayr for Murphy
By Steve Chambers

#AD New UK customers (Excluding NI) mobile only. £30 in FREE Bets (FB) as £20 in sports bets & a £10 casino bonus (CB). Min stake £10. Min odds Evs. FB applied on 1st settlement of any qualifying bet. FB 7 day expiry. 1 FB offer per customer, household & IP address only. Payment restrictions. 14 days to accept £10 CB, then active for 3 days. CB 5x wagering & max redeemable £100. Game restrictions apply. Cashed out/Free Bets won’t apply. 30 days to qualify. 18+. T&Cs apply
get offer
Bet £19 get £66 in Free Bets
#AD New customers on mobile only. Stake min amount of £19 (odds 1.8 or greater) on any sporting event. Promotion available between 14/11/22 - 01/12/22. Max 4 x £10, 4 x £5, 1x £6 Free Bets credited on qualifying bet settlement on selected events. 1x claim per customer. Void, cashed out, partially cashed-out bets do not qualify. Each Way bets, system bets, and profit boosts are not permitted for qualifying bet. Free bets expire after 7 days of qualifying bet settlement. T&C’s Apply
Double the odds, any sport, any bet, any odds!
#AD 18+ begambleaware.org Only valid for new registrations to Grosvenor Existing members do not qualify, Bet must be placed using real money in combination with the Odds Boost Token, Offer applies to Sport bets only. Max stake is £10. Each way bets are a maximum of £5 each way (£10 total). Customers have 60 days after registration to use the Odds Boost token. T&Cs apply.
Bet £20 & Get it Back As CASH If It Loses
#AD New customers only. Place your FIRST bet on any Horse Racing market and if it loses we will refund your stake in CASH. Max refund for this offer is £20. Only deposits made using cards will qualify for this promotion. T&Cs apply.
Welcome Offer
#AD Bet £10 & Get £50 in Free Bets for new customers at bet365. Min deposit requirement. Free Bets are paid as Bet Credits and are available for use upon settlement of bets to value of qualifying deposit. Min odds, bet and payment method exclusions apply. Returns exclude Bet Credits stake. Time limits and T&Cs apply. The bonus code SPTS365 can be used during registration, but does not change the offer amount in any way.
Bet £10 Get £30 In Free Bets
#AD 18+. Play Safe. New customers using Promo code R30 only, Min £10/€10 stake,  min odds 1/2, free bets paid as 3 x £10/€10, free bets credited after settlement of first qualifying bet, free bets will expire 30 days after the qualifying bet is placed, payment method/player/country restrictions apply.
Bet £20 & Get it Back As CASH If It Loses
#AD 18+ begambleaware.org Max £20 refund on first bet. Bet must be placed in first 7 days of account opening. Only deposits made via Debit Card will be eligible for the promotion. T&Cs apply.
Bet £10 Get £60 in Bonuses
#AD New UK customers only. Register using the promo code BETFRED60, deposit and place first bet of £10+ on Sports (cumulative Evens+) within 7 days of registration. First bet must be on Sports. £20 in Free Bets to be used on Sports, £10 in Free Bets to be used on Lotto and 50 Free Spins (20p per spin) credited within 48 hours of bet settlement. Further £20 in Free Bets credited 5 days after settlement. Bonuses have a 7-day expiry. Payment restrictions apply. SMS verification and/or Proof of I.D and address may be required. Full T&Cs apply.
Bet £10 Get £30 Free Bets (APP Only)
#AD New UK, IE & Malta customers only. 18+. Min £10/€10 first deposit using Debit Card or Trustly. Place a bet of £10 at min odds of 1.5. Free bets expire in 90 days. Full T&Cs apply.
Bet £10 Get £30 Free Bets + £10 Casino Bonus
#AD Minimum deposit of £10 using deposit code 30F - A qualifying bet is a ‘real money’ stake of at least £10 placed on any sports market - Minimum odds of 1/2 (1.5) - Free bets credited upon qualifying bet settlement and expire after 7 days - Free bet stakes not included in returns - Casino Bonus must be claimed within 7 days • To withdraw bonus/related wins, wager bonus amount x40 within 14 days • Wagering req. vary by game • Withdrawal restrictions and Full T&C’s apply. 18+ begambleaware.org
Bet £10 Get £30 Free Bets
#AD Offer includes a free £1 Race Index spread bet to try out our exciting 50-25-10 race markets. Place a £10 fixed odds bet at minimum odds of 1/2. Get 2 x £10 free fixed odds bets + 2 x £5 free Winning Favourites spread bets. Bet with live streaming on all racing and greyhounds! Ts&Cs Apply. 18+ begambleaware.org
£35 Free Bet + 10 Free Spins
If your account has Sportsbook losses at the end of your first day's betting, QuinnBet will refund 50% of your losses as a Free Bet up to £35 (min 3 bets) Plus 10 Free Spins. Even if your account is up, you're guaranteed a £5 Free Bet Plus 10 Free Spins provided you place at least 1 bet of £10 or greater at the minimum odds. T&Cs apply | 18+ New UK Customers Only | BeGambleAware.org
50% Up To £50 Welcome Bonus
#AD 18+ begambleaware.org; New bettors get 50% of deposit up to £50; Once per household; Min deposit £15 (no Skrill/Neteller); Wager a total of 8 times deposit + bonus, with max qualifying bet stake equal to your initial bonus amount; Bonus expires after 60 days; Min odds of 4/5 on singles, or 2/5 per leg for acca; Some bet types excluded; See full terms.
Latest racing results
Wolverhampton
16:20
Full Result
1stLady Percival
2/1F
2ndVictory March
11/4
3rdFairmac
9/2
Wolverhampton
15:50
Full Result
1stNever Dark
7/2
2ndPockley
6/4F
3rdSecond Collection
13/2
Southwell
15:35
Full Result
1stSporting Mike
9/4
2ndSamatian
7/4F
3rdBalinesker Beach
10/1
View All Today's Results