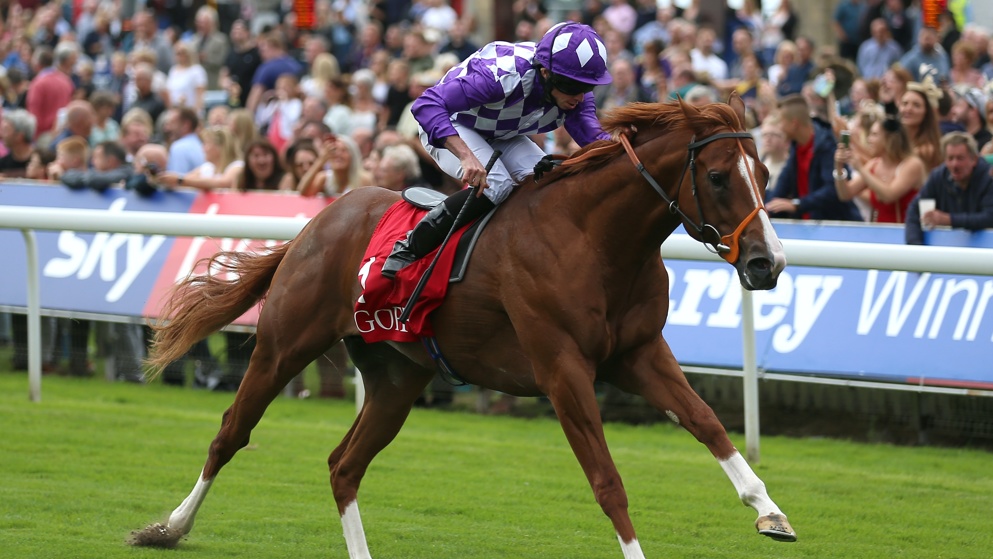 Mums Tipple was a devastating 11-length winner of a valuable sales race at York last summer.

Tom Marquand has reported the exciting Mums Tipple to be in fine form as he gears up for this three-year-old campaign.

The son of Footstepsinthesand burst onto the scene last summer, producing a demolition job to win a valuable sprint at York by 11 lengths last August, and he’s one of the leading protagonists in the betting for next month’s Commonwealth Cup at Royal Ascot.

Marquand has been regularly riding out at Richard Hannon’s yard during the lockdown, and while he hasn’t had a chance to sit on the colt, he’s been impressed with what he’s seen on the gallops.

He said: “I’ve not actually had a chance to sit on him yet, but I’ve seen him out on the mornings at Richard’s and he looks great. He’s done really well for the winter.

“Richard’s horses tend to grow a hell of a lot from two to three, and last year he was an incredibly flashy good-looking horse anyway, and he’s only gone on and done better now.

Mums Tipple? Whatever he's drinking, we'll have a pint of that! @yorkracecourse 👏👏

“Not many horses provide us with a demolition job like that over such a short trip, but he was always a horse that we were very keen on at home and he did always stand out a bit.

“It came as a bit of a surprise how he did it (at York), but it was always expected that he was quite a nice horse, and that was pretty spectacular.”

Mums Tipple followed up that York success with a below par effort up in grade in the Group 1 Middle Park Stakes at Newmarket the following month, though Marquand pointed out that there were excuses for that performance;

“He got a kick at Newmarket off Siskin when he went into the stalls, which explains the below par run, and he remains a horse we can all look forward to seeing back on the track,” he said.

Marquand was in conversation with the HorseRacing at Home Podcast, and he also picked out a filly from the William Haggas yard that he was looking forward to this season;

“I’ve probably been quite widely public in stating that Born With Pride is a filly that impressed us all last year. In her one and only run she was extremely unique in the fact that she won a Listed race first time out.

“I’ve never seen it done before in my lifetime racing, obviously it has been done before, but it’s a pretty incredible feat, and she’s a filly who looks like she’ll stay a trip for this year - so I’m really looking forward to seeing her get back on the track.”

Tom was speaking to the latest episode of the HorseRacing at Home Podcast, which you can listen to below.