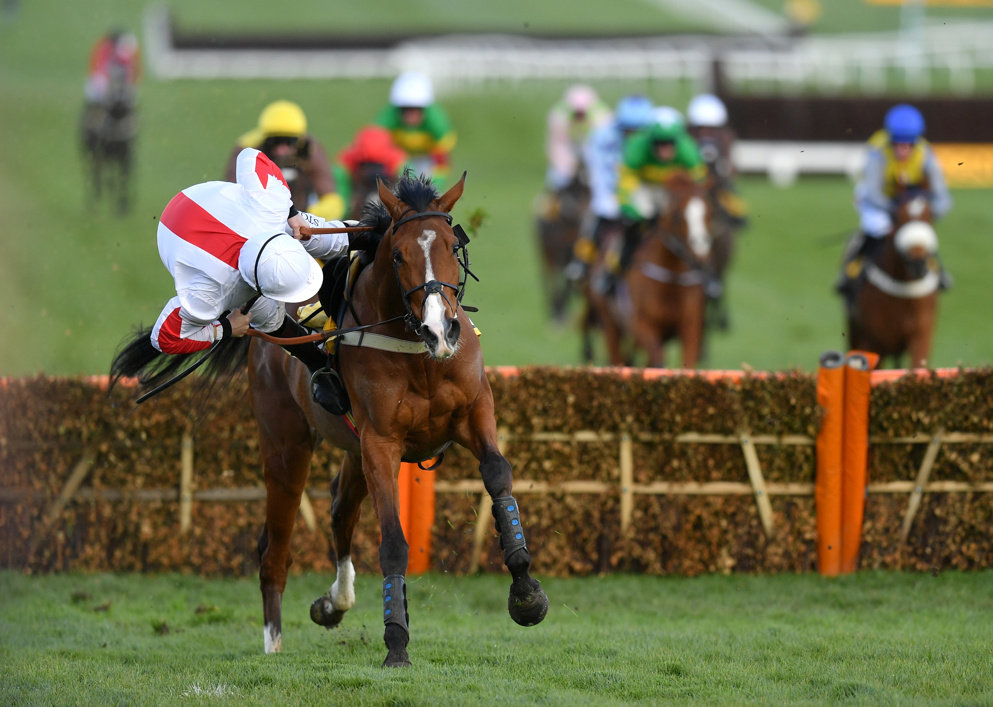 Goshen dramatically unseated Jamie Moore at the final flight when having the race at his mercy.

It looked for the world as though the Gary Moore-trained Goshen would take the step up into Grade 1 company in his stride, and approached the final hurdle with a near-10 length lead.

However, having hit a jaw-dropping 1.04 in-running on the Betfair Exchange (25/1-on), the four-year-old made his first significant mistake of the afternoon, clipping the hurdle with his hind legs and leaving jockey Jamie Moore with no chance of staying on board - snatching defeat from the jaws of victory in the process.

The helpless Moore could then only watch on as Burning Victory took full advantage, pulling clear of the staying on Aspire Tower and the well-fancied Allmankind to record an unthinkable two and three quarter-length success.

It was an outcome which devastated both punters and connections alike, and despite having questions about his temperament coming into the race, Goshen didn’t put a hoof wrong throughout.

A host of well-fancied names disappointed in behind, including the Paul Nicholls-trained Solo and the Irish raider A Wave Of The Sea, and it was a near-flawless performance from Goshen, something which Willlie Mullins was quick to admit.

He said: "I feel like a bit of an imposter in here (the winners’ enclosure). I feel very sorry for Jamie and Gary (Moore). It was their one shot of the meeting and they had all the work done.

“Jamie asked all the right questions coming to the last, asked him to take off and the horse just didn't take off for him. These things happen unfortunately. I'm delighted to have a winner for my clients, but I feel hugely for Gary and Jamie, a father and son team. The whole year, and down it is.

It set the tone for a stunning day for jockey Paul Townend (who would go on to ride a treble of Grade 1 wins on the day, which included the Cheltenham Gold Cup), and he conceded that the victory was a fortuitous one.

He said: "It's not the nicest way to win a race but I have been on the other end of that, so I know what it feels like. We will take every bit of luck we get.

"I jumped the first two well and Burning Victory improved so much from her first run. I fell out through a couple down the back and I couldn't rush her then, I had to let her find her feet again.

"When I got her out down the hill, she started to pick up for me and I was lucky enough to have the horse to be in a position to pick up the pieces."

Meanwhile, Goshen’s owner Steve Packham was particularly gracious in defeat; "It is one of those things, it's Jump racing unfortunately,” he said.

“He's not the first horse to fall or unseat at the final jump at Cheltenham, and he won't be the last. Hopefully both horse and rider are fine. Jamie is obviously distraught.

"It's such a shame but there you go. Jamie didn't realise he was as far clear as he was. He should have popped him perhaps like he did when everyone said he ran down the jump at Ascot.

"The noise in the stand when he unseated was incredible. I've learned a lot over the years, and I know horses can be fragile and mistakes happen. It's a massive thing for me just to have a runner at Cheltenham, because I've been coming here for 30 years - I've lived and dreamt every scenario over the past month, from falling at the first to falling at the last and winning, so it hasn't completely surprised me.

"Quite a few years ago I had a horse in partnership with my brother and trained by Richard Rowe called Glad To Know You. He was due to run on the final day, but the ground became too firm and he was pulled out on the day.

"We live to fight another day."