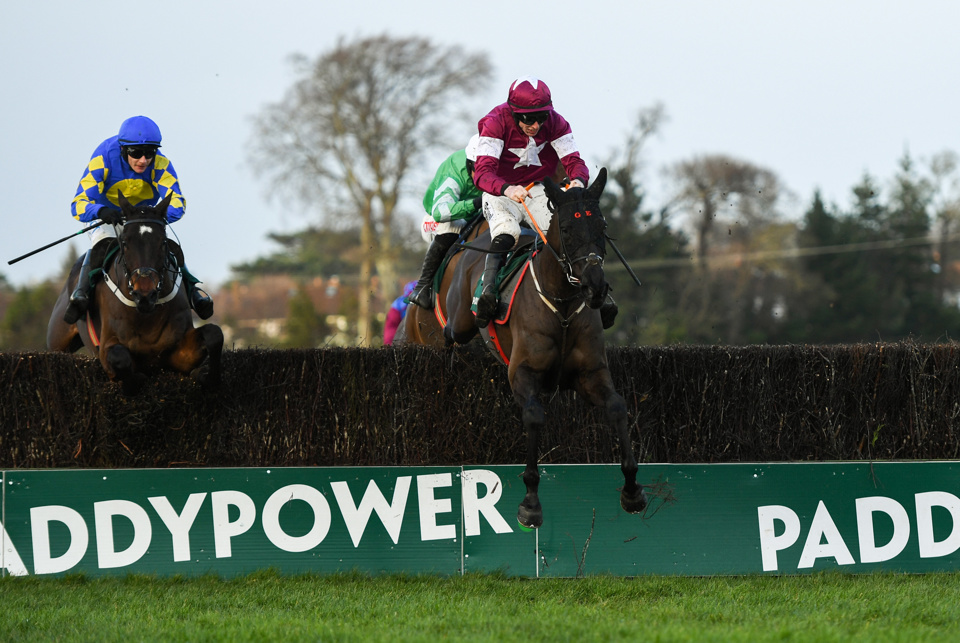 Delta Work will bid for back-to-back wins in the Irish Gold Cup on Sunday.

Our resident columnist Tom Lee previews the Dublin Racing Festival and picks out his Irish Gold Cup selection, while picks out a Festival Novices' Chase contender to watch at the Cheltenham Festival...

Shunt In The Hunt For Leopardstown Glory

There's plenty of excitement brewing ahead of this week's Dublin Festival Of Racing, and rightly so.

Now firmly established as one of the key markers on the fixture list, this weekend long Leopardstown extravaganza sees no less than eight Grade 1's run at the ever-alluring Foxrock venue, with clues for next month's Cheltenham Festival likely to be in bountiful supply.

However, away from the glitz and glam of the top-level prizes, Saturday afternoon's 0-150 Matheson Handicap Chase (14.45pm) is run over an extended two miles and a furlong and looks one of the more compelling betting contests. A maximum field of 20 are due to face the starter, and to put it mildly there'll likely be no shortage of pace on.

Two weeks ago this column celebrated the achievements and excellence of a Mullins, retiring jockey David, but is the key to this fiendishly tricky handicap another of the famous racing clan? You'd be forgiven for suggesting it's champion trainer Willie, responsible for the seemingly fancied, first-time hood wearing Pont Aven, as well as lively outsider Andalusa, but beware the challenge saddled by another member of the racing dynasty, namely nephew Emmet.

In decent form, his only recent runner, Noble Yeats, cantered to a 19-length victory at Thurles a few days ago, earning himself a crack at the 4.25 race on the same Saturday afternoon card.

A Cheltenham Festival-winning rider himself, this shrewd young trainer isn't afraid to take on anything, landing a sting of well backed victories in Ireland and Britain, as well as finding success across the channel in France.

One of this stable's successful scalps came courtesy of The Shunter at Cheltenham's November Meeting, the eight-year-old Stowaway gelding powering to a three-length success in the prestigious Greatwood Handicap Hurdle.

That made it three wins from five appearances since joining his current stable last summer. Impressive work by anyone's standards. He now reappears in this off the back of an 83-day absence, switched to the larger obstacles.

We know he won't be fazed by a big field or a helter skelter gallop, and if his occasionally iffy jumping holds up he might still be extremely well handicapped off a rating of 132.  That equates to a lovely low racing weight, and with luck in-running The Shunter could be a huge danger.

The Shunter wins the Unibet Greatwood Handicap Hurdle at @CheltenhamRaces

Harambe came down at the last but is up and okay

A top-rated, course specialist, trying to repeat last year's success in the same race, but seemingly ignored by the bookies? Four times Delta Work has lined up in a race over fences at Leopardstown, three have resulted in victory.

The 170-rated steeplechasing superstar has endured a strange 12 months since winning the Irish Gold Cup here 12 months ago, running well but only into fifth in the Cheltenham Gold Cup, needing the outing as expected on his seasonal reappearance at Down Royal in October, then unseating at the ninth in the Savills Chase at Christmas.

His trainer, Gordon Elliott, has been uncharacteristically quiet of late, and here the Network eight-year-old locks horns once again with the might of Kemboy, plus rising star Minella Indo.

Even so, Delta Work is entitled to massive respect as he attempts to regain his mojo in Sunday's big race. He loves it here and is in his prime.

Waterlogging, snow, ice and anything else the winter could throw at us wiped out much of last weekend's calendar of racing, but happily Naas got the go ahead on Sunday afternoon, on a card where their Grade 3 staying novice chase run over three miles and a furlong went the way of an impressive type, Henry de Bromhead's seven-year-old French-bred gelding Eklat De Rire.

Now two from two over fences, this former Dromahane Point-to-Point scorer dominated throughout in the hands of the ever-excellent Rachael Blackmore, part of a double on the day for stable and jockey.

Don't be surprised to see this exciting sort make the journey to Cheltenham next month - depending on where you shop around he is something in the region of 12/1 or 14/1 for both the Festival Novices' Chase and the longer National Hunt Chase.

As a sport, we have to be eternally grateful racing falls into the 'elite' category, and thus is allowed to continue during the throes of the Coronavirus pandemic. The great outdoors is king, with the pre-parade, paddock and obviously the track itself all enveloped with plentiful fresh air and space.

That doesn't tell the full story though, as anyone who has been racing on a British track in any capacity of late will tell you. Major credit should go to the governing body within the sport, with the British Horseracing Authority implementing a rigorous schedule of checks and balances to ensure the safety of all participants, be they officials, jockeys, trainers, stable staff, media, medics, stalls handlers or any one of the faces who keep the show on the road at an odd time the paying public are unable to gain access.

In roles ranging from horsebox driver, groom, assistant trainer and general dogsbody, your correspondent has been to several venues of late, among them Carlisle, Ffos Las, Haydock, Hereford, Warwick and Wetherby.

Before leaving home, you have to complete a lengthy online Covid-safe assessment, without which someone in a working capacity can't even access the online race-day health and safety questionnaire, a step necessary for each and every fixture.

On arrival at the track, there's is a temperature check and additional questionnaire, all of which have to be met to a satisfactory standard, before gaining admittance.

Add in strict distancing measures, mask wearing and courses offering rivers of hand sanitiser and hopefully you have a successful recipe to persuade the relevant authorities our sport is safe to continue throughout. Fingers crossed, especially with Cheltenham just seven weeks away.