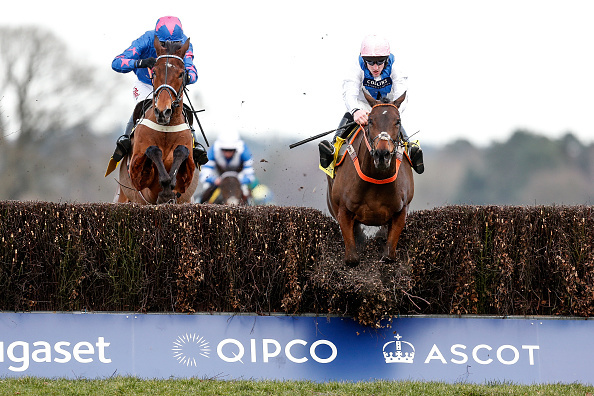 There are five bets for the first day of Aintree’s Grand National Festival.

The Grade 1-winning hurdler FUSIL RAFFLES (1 point win bet at 5/2) has done little wrong since switching to the larger obstacles with his only blip coming when pulled up on testing ground at Cheltenham in November. He has won three times over fences and put in a very good performance to finish second to stablemate Chantry House in the Marsh Novices’ Chase at Cheltenham last month. He went from the front that day, jumped well and showed a good attitude. A repeat here would make him very difficult to beat. Protektorat, runner up the last twice, retains plenty of potential and can chase home the selection.

Patience certainly has been the key with WAITING PATIENTLY (1 point win bet at 4/1), who has made just 15 career starts. Out of the first three just once (unseated in the King George), this hugely talented chaser now looks set to land a second Grade 1. Having finished an excellent second to Frodon at Kempton on Boxing Day, he looked to have found 2m1f too sharp at Ascot. The step back up in trip on better ground looks ideal and he arrives here fresher than most having skipped Cheltenham. Native River should go well as usual and it won’t be too long before everything falls right for Mister Fisher.

This looks a really good opportunity for MCFABULOUS (NAP – 1 point win bet at 10/3) to record a first Grade 1 success. The decision to miss Cheltenham last year and go to Kempton instead was justified when he bolted up by 6.5-lengths. He then impressed again when winning by three-lengths on his seasonal reappearance at Chepstow before losing nothing in defeat behind Thyme Hill and Paisley Park in a thrilling renewal of the Long Distance Hurdle at Newbury. He returned to the winners’ enclosure with a Grade 2 success next time out and can bounce back from an uncharacteristically poor performance at Fontwell when second 39 days ago. Two-and-a-half miles around Aintree should be ideal and he can once again benefit from not running at Cheltenham. Jason The Militant, the mount of Rachael Blackmore, and Brewin’upastorm, ahead of the selection last time, complete the shortlist.

Getaway Trump bounced back to form in really good style at Doncaster (tipped here) last time out and should go well again. However, the step back up in class and burden of top weight in this competitive handicap will make things much tougher. Preference is therefore for two at bigger prices.

Donald McCain won this in 2017 and with the race named in honour of Red Rum, he is likely to have GAELIK COAST (0.5 point win bet at 12/1) fully tuned up. Jockey Brian Hughes is in a real battle to retain his Champion Jockey status and this looks a decent ride. Hughes has been aboard this horse for all but one of his ten career starts and has ridden him to four victories. Two of those have been over fences, over which he has made a good start with form figures of 12513. The drop back in trip in what is likely to be a strongly run race will be in his favour, as will the return to better ground.

At an even bigger price, THE KING OF MAY (0.5 point win bet at 20/1) also looks to have plenty in his favour and represents another leading northern trainer in Brian Ellison. A recent spin on the All-Weather will have put him spot on for this and he can resume the good form he had shown over fences over the winter. Runner up on two occasions and a close third at Wetherby, he has looked a progressive young chaser despite ground conditions arguably being softer than ideal. He is unbeaten in three starts on good to soft and gets in here off just 10-10.

Today's horse racing tips at Ayr and Newbury on Sunday. Our resident tipster Chris Baker has four bets for the…

Today's horse racing tips at Thirsk and Curragh. Our resident tipster Chris Baker has two bets for the racing…

Today's Horse Racing Tips: A Word for this Wise pick at Bath
By Chris Baker

#AD New customers only. Place your FIRST bet on any sportsbook market and if it loses we will refund your stake in CASH. Max refund for this offer is €/£20. T&Cs apply. 18+ begambleaware.org
get offer
Bet £10 Get £40 in Free Bets
#AD 18+. Play Safe. New customers using promo code M40 only. 1x per customer. Min £/€10 bet. Min odds 1/2 (1.5). Free bets of 2 x £/€15 issued after first qualifying bet settles. Max £/€10 Bonus. 35x wagering requirement. Max redeemable bonus: £25. Casino bonus expires after 72 hours. UK & Eire only. Additional T&Cs, including free-bet, game, location, payment method and stake contributions apply. begambleaware.org.
Welcome Offer
#AD Open Account Offer. Up to £100 in Bet Credits for new customers at bet365. Min deposit £5. Bet Credits available for use upon settlement of bets to value of qualifying deposit. Min odds, bet and payment method exclusions apply. Returns exclude Bet Credits stake. Time limits and T&Cs apply. The bonus code ‘100BET365’ can be used during registration, but does not change the offer amount in any way. 18+ begambleaware.org.
Bet £10 Get £30 Free Bets + £10 Casino Bonus
#AD Minimum deposit of £10 using deposit code 30F - A qualifying bet is a ‘real money’ stake of at least £10 placed on any sports market - Minimum odds of 1/2 (1.5) - Free bets credited upon qualifying bet settlement and expire after 7 days - Free bet stakes not included in returns - Casino Bonus must be claimed within 7 days • To withdraw bonus/related wins, wager bonus amount x40 within 14 days • Wagering req. vary by game • Withdrawal restrictions and Full T&C’s apply. 18+ begambleaware.org
Bet £10 Get £30 + 60 Free Spins
#AD New UK & NI customers only. Promo code SPORTS60. Deposit and place first sports bet of £10+ in one transaction, at odds of Evens (2.0)+, settled within 60 days. First bet must be on Sports. £30 in Free Bets credited within 48 hours of bet settlement. 7-day expiry. Payment restrictions apply. SMS validation may be required. Max 60 Free Spins on Justice League Comics. 7-day expiry.  Full T&Cs apply. 18+ begambleaware.org
Up To £100 In Free Bets
New customer offer. Place 5 x €/£10 or more bets to receive €/£20 in free bets. Repeat up to 5 times to receive maximum €/£100 bonus. Min odds 1/2 (1.5). Exchange bets excluded. T&C's apply, 18+ begambleaware.org
Bet £10 Get £40 In Bonuses
#AD 18+ new customers only. Deposit, opt-in and place a £10 qualifying bet at odds of 2.00 or greater within 7 days of opening a new account; excludes cashed out bets. Receive 3x £10 Sports Free Bets, valid on set events only at odds 2.00 or greater. Plus, a £10 Game Show Bonus, selected games, wager 40x to withdraw a max of £250. Bonuses expire in 7 days. T&Cs Apply, see below. Please Gamble Responsibly. 18+ begambleaware.org
Bet £10 Get £20 In Free Bets
#AD Min stake £10. Min odds 1/2 (1.5). First bet only. Free bets expire in 7 days. Cashed out bets won’t apply. Payment method restrictions. Online UK customers only. 30 days to qualify for £20 in Free Bets. 18+. T&Cs apply
Money back As A Bonus Up To £40 If Your First Racing Bet Loses + £10 Casino
New customers only. 18+, BeGambleAware.org. Min deposit £10. Money back as bonus. Wagering requirements: Racing 3x at min. odds of 1.40 (2/5), Casino 35x. Only one bonus can be used at a time, Racing bonus must be wagered before using the Casino, unless the bonus has been forfeited. Bonus will expire after 7 days of opt-in. #ad
Bet £10 Get £5 Or 50% Losses Back Up To £25
To activate your Sportsbook 50% Back Welcome Offer, simply deposit and bet on any Sportsbook markets of your choice at odds of evens (2.00) or greater. If your account has Sportsbook losses at the end of your first day's betting (23:59), we'll refund 50% of your first day's losses as a Free Bet up to £25 (Minimum 3 bets required). If your account is up, you're guaranteed a £5 Free Bet provided you place at least 1 bet of £10 or greater at minimum odds evens or greater. T&Cs apply. 18+ begambleaware.org
Advert Disclaimer
Horseracing.net is a free online resource which endeavour to provide helpful and useful content and odds comparison to its visitors. Please be advised that Horseracing.net accepts affiliate commission from the companies appearing on the site, and agreed commission levels impact the location and order in which the companies (and/or their products) are presented on the website. Any ratings that appear on this site is determined by our subjective opinion of the brand but also based on market share and reputation, each brand's conversion rates, commission paid to us and general consumer interest. Company listings on this page don't imply our endorsement. We do not feature all providers on the market. Except as expressly set forth in our terms and conditions, all statements and warranties regarding the information presented on this page are disclaimed. The information, including odds, which appear on this site is subject to change at any time.
Today's Most tipped
Adrien Du Pont
Kempton 17:20
1/6
13 Tips Bet Now
Ripper Roo
Market Rasen 17:00
4/9
13 Tips Bet Now
Scarlet Bear
Pontefract 15:30
4/7
12 Tips Bet Now
Bob And Co
Hexham 15:52
2/11
12 Tips Bet Now
Latest racing results
Ayr
17:20
Full Result
1st Vina Ardanza
15/2
2nd Masaccio
5/1
3rd Drumbear
9/1
Dundalk
17:15
Full Result
1st Iva Batt
16/1
2nd Roses Blue
4/1
3rd Ginsburg
3/1
Newbury
17:05
Full Result
1st Flyin' Solo
6/1
2nd Aaddeey
9/4 F
3rd Amir Kabir
22/1
View All Today's Results