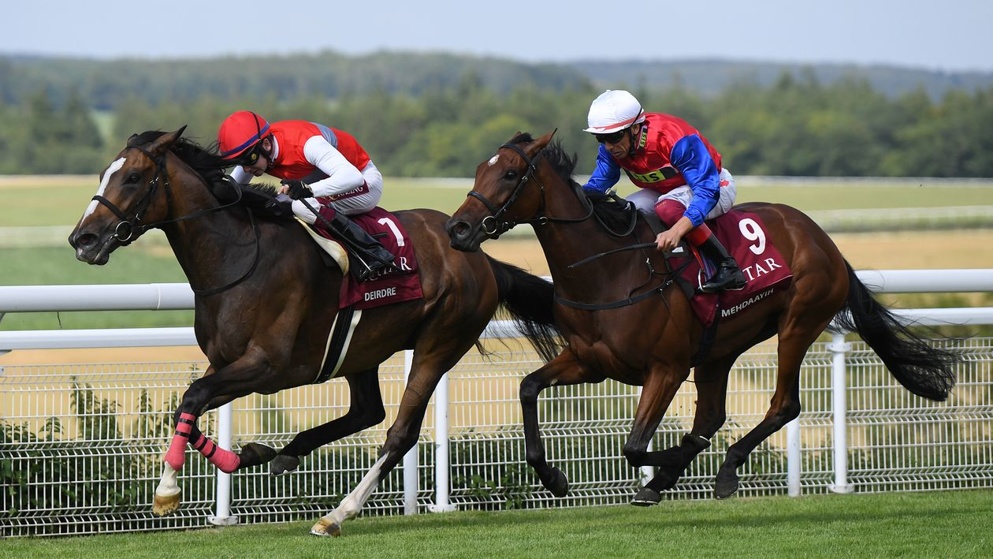 Deirdre (left) became the first Japanese-trained Group 1 winner in Britain since 2000 when winning this last year.

Deirdre will face off against a stellar field of seven rivals in next week’s Nassau Stakes, as she bids to win the Group 1 contest for the second year running.

The six-year-old became the first Japanese-trained horse to win a British Group 1 race since 2000 when causing a 20/1 surprise in this last year, and she arrives here on the back of finishing fifth on reappearance in the Coral-Eclipse at Sandown earlier this month.

Oisin Murphy will once again take the ride, though Deirdre is set to face off against some smart fillies and mares, including the Falmouth Stakes winner Nazeef, who has won each of her last six starts for the John Gosden team and is the choice of Jim Crowley.

As many as five Group 1 winners could line for next Thursday’s feature, with both Magic Wand and Tawkeel also set to take their chance. Like Nazeef, the latter also carries the colours of Sheikh Hamdan Al Maktoum, and is unbeaten in four starts in France to date for Jean-Claude Rouget, winning the Prix Saint Alary at Chantilly last month. Meanwhile, Fancy Blue was also successful in a Group 1 at Chantilly last time, and will be looking to build on that here for Donnacha O'Brien.

The prospective field is completed by the pair of four-year-olds Lavender’s Blue and Queen Power, and the three-year-old filly One Voice.

Thursday’s card at Goodwood is an excellent one, and also includes the Richmond Stakes, a Group 2 contest for two-year-olds over six furlongs which was won by subsequent Commonwealth Cup winner Golden Horde last year.

There could be a maximum field of 10 runners for this year’s renewal, which includes Yazaman, who has finished second in the Windsor Castle Stakes at Royal Ascot and in the July Stakes at Newmarket the last twice.

Also on the card is the Group 3 Gordon Stakes over a mile and a half, in which English King will be looking to bounce back from failing to justify favouritism in the Epsom Derby last time out. Also entered are Emissary, Khalifa Sat and Mogul, all of whom also took their chance at Epsom earlier this month.