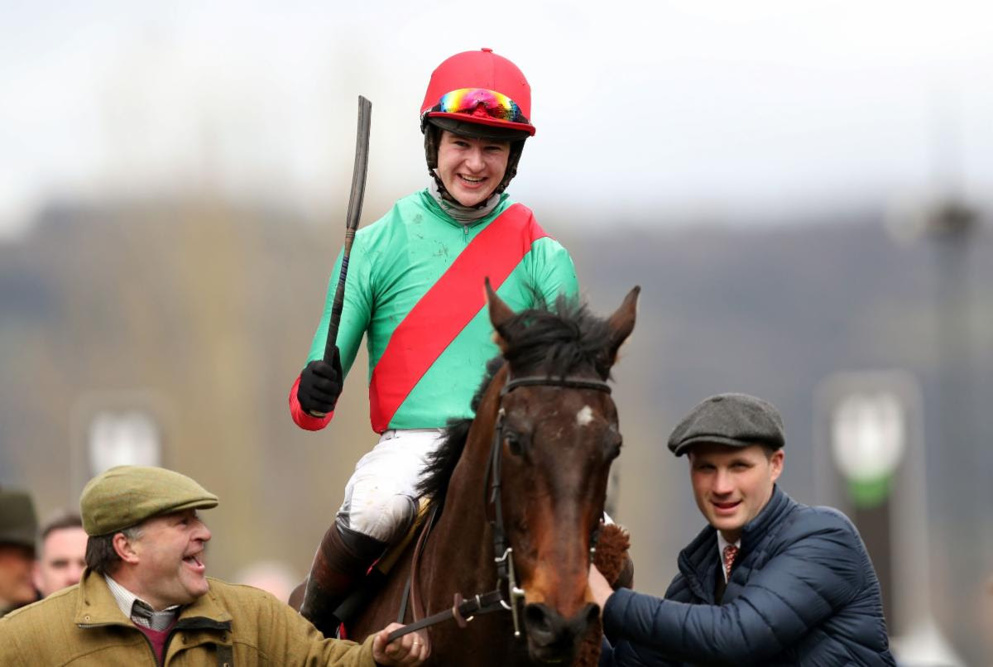 The Conditional looks to have a leading chance in Saturday's Ladbrokes Trophy at Newbury.

Having highlighted each-way winners at 16/1 and 33/1 in his most recent article, Nick Seddon takes an early look at the weekend's entries at Newbury, and picks out five horses that have caught his eye...

The Berkshire Novices’ Chase has a habit of producing a high-class staying chaser - with the recent recent roll of honour including the likes of Bobs Worth (2011), Coneygree (2014), Clan Des Obeaux (2016) and Champ (2019) - and Colin Tizzard will be hoping that Fiddlerontheroof can add his name to that illustrious list. The six-year-old was a smart performer over timber last season, winning the Grade 1 Tolworth Hurdle at Sandown in January, and opened his account over fences at the second attempt when battling to success in a warm-looking event at Exeter earlier this month. He’s already produced some smart-looking form over the big obstacles, and he’s an odds-on favourite at the time of writing to pick up a first Graded success.

It's a select field of three for this Grade 2 contest, and Getaway Trump will be aiming to pick up a third success in four starts for the Paul Nicholls team. He's proven to be rather hit and miss over fences so far, but is talented on his day, and appreciated the step up to two miles and five furlongs when striking at Fakenham earlier this month. He isn't without a chance, though at the prices it looks worth siding with the Nicky Henderson-trained Caribean Boy - who's making his first start for 286 days. He squeezes into this race by virtue of the fact that his novice status only expires at the beginning of December, and looked a useful type when winning in good style in difficult conditions at Haydock in February. He produced a good round of jumping that day - something Fiddlerontheroof hasn't always convinced with - and bearing in mind that Caribean Boy is open to more improvement yet on just his third outing over fences, he looks worth siding with to take an interesting heat.

A fantastic finish to the @RacingTV HD On Sky 426 Beginners' Chase as Fiddlerontheroof fights back to deny Silver Hallmark, providing jockey @Robbie_Power_ & @colintizzard with a double in the process 🏆 https://t.co/gvleJtSXdX

Paisley Park's inability to defend his Stayers' Hurdle crown was undoubtedly the shock of this year's Cheltenham Festival, and having been found to have been suffering from a heart problem in the aftermath, the eight-year-old will line-up for his seasonal reappearance with plenty of questions to answer. That Cheltenham performance was uncharacteristically flat, but the reports from the Emma Lavelle team are hugely positive, and he'll be the one to beat if his trainer has managed to return him to his old self. With that in mind, the 9/4 that's currently on offer with Betfred looks particularly attractive, and Paisley Park is fancied to strike again in a race he won last year.

Standing in his way is his Festival conqueror Lisnagar Oscar, though he needs to prove that wasn't a flash in the pan after a tame reappearance at Wetherby last month, while Summerville Boy is a classy type on his day and will appreciate the return to three miles after winning over shorter on reappearance at Aintree last time. The graduating pair of novices Thyme Hill and McFabulous are two more to seriously consider, though all four would struggle to live with an on song Paisley Park - who's fancied to regain control of the staying division here.

Pick your jaw from off the floor - Lisnagar Oscar lands the @paddypower Stayers' Hurdle at 50-1!

Saturday's card begins with a listed mares' novices' hurdle over two miles, in which the red hot Mrs Hyde will be bidding for a fifth win in six starts over timber. Mrs Hyde has proven to be a revelation since switching to Ellison in the summer, and she's improved with each of her five starts for the yard so far, with her only defeat coming in what was a tough ask under a double penalty at Market Rasen in September. Her most recent victory at this level at Wetherby last month was her best effort yet, and there was plenty to like about the way she dug in to see off the attentions of Verdana Blue - who's a very smart performer on her day.

Of course, Verdana Blue isn't quite the force of old these days, but she's been in good heart this year, and it's worth noting that Mrs Hyde had to give weight to a rival who was weighted 23 lb her superior, a performance which certainly isn't to be scoffed at. Indeed, there's plenty to like about the trajectory of this likeable seven-year-old, and should she win again on Saturday, she will likely find herself at the head of the market for next year's Mares' Novices' Hurdle. With that in mind, it could be worth having a small play on the 20/1 available with BetVictor for the Grade 1 contest, in the hope that her stock continues to rise between now and March.

Four from five over hurdles!

The John Francome Novices' Chase has been won by the likes of Thistlecrack, Santini and Native River in recent years, and Southfield Stone could be another smart graduate of this Grade 2 contest. The seven-year-old will make his final start in novice company before his status expires at the end of the month, and he will do so with an emphatic form boost under his belt, with Coole Cody - whom he defeated at Cheltenham in October - having won the Paddy Power Gold Cup at the same track a fortnight ago.

Admittedly, Southfield Stone wasn't so hot at the same meeting last time out, being defeated by 17 lengths in a novice contest by Protektorat, but it's worth noting that he had to concede 3 lb to a potentially smart rival that day, and the step up to just shy of three miles here will certainly suit him. Paul Nicholls is the master of placing his horses, and this looks a good opportunity for Southfield Stone to exploit his evaporating novice status, and pick up a nice pot before graduating.

A fourth win in the contest for the Ditcheat maestro as Southfield Stone records a second win over fences under @CobdenHarry at @CheltenhamRaces https://t.co/Gd7jVG0XvU

The feature of the weekend is the £200,000 Ladbrokes Trophy, a handicap which more often than not produces a high-class staying chaser. Indeed, the likes of Bobs Worth, Many Clouds and Native River have won this in recent years, and several are worthy of consideration in this year's renewal, including the current favourite Vinndication, who will have to defy a big weight of 11-11 if he is to be successful. No horse has carried that kind of weight to victory since the great Denman in 2007 and 2009, though, and one runner who appeals as being on a much more competitive mark is The Conditional. He's done nothing but improve since switching to the David Bridgwater team last season, and having finished a fine second in this 12 months ago, he's since gone on to win the Ultima Handicap Chase at the Festival - defeating the reopposing Kildisart by a neck.

He exploited a very attractive looking mark of 139 that day, and still appeals as one who's competitively weighted here off a revised mark of 147. The Conditional's jumping cost him for win purposes on a couple of occasions last year, but he looked much more the finished article at the Festival, and there's reasons to believe that more improvement could be forthcoming yet. It could be that the Grand National is the main aim for The Conditional this season, and there's every reason to think that he can enjoy a big year.

The Conditional has excellent handicap form and survives a late scare to strike in the Ultima under @brendanp1995.