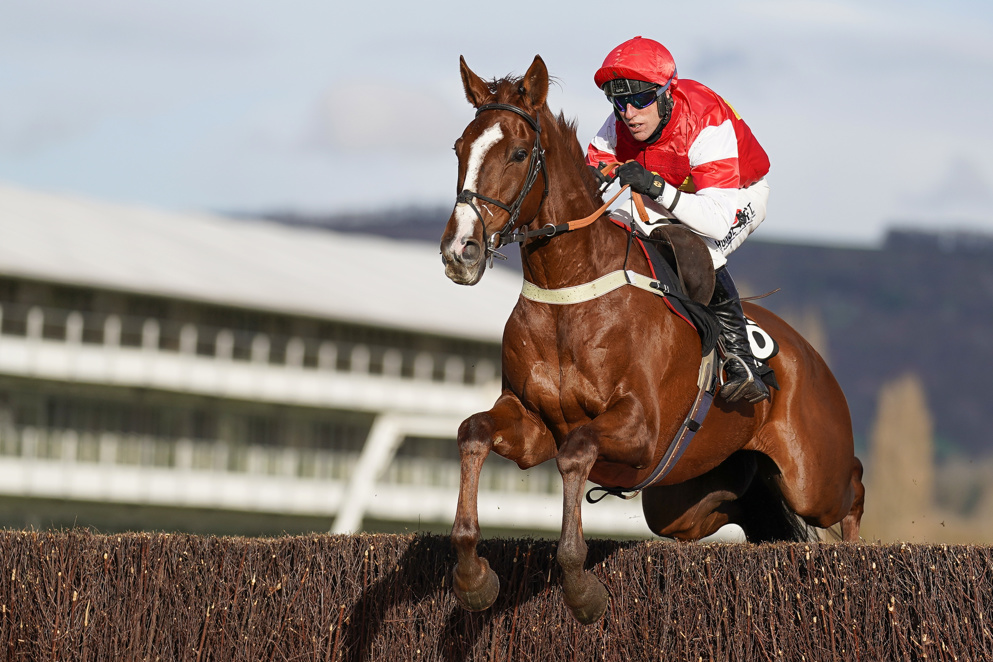 Colin Tizzard will hope The Big Breakaway can build on his win at Cheltenham on Sunday.

Three exhilarating days of National Hunt racing at Cheltenham's November meeting served up a whole host of talking points and impressive performances. Paul Ferguson, who along with Weatherbys has produced the Weatherbys Cheltenham Festival Guide 2021, which is available to pre-order here, has picked out his eye-catchers from Prestbury Park...

The fact that the concluding event on Saturday ended in a dead-heat caused plenty of controversy, but whichever way you look at it, the finish was fought out by two potentially smart mares. Given that Ishkhara Lady is already six, I would expect her to head straight over hurdles, whereas Elle Est Belle is only a four-year-old, so should continue down the bumper route. I was at Aintree when she made a winning racecourse debut just 20 days earlier and she was hugely impressive on that occasion. She again travelled with purpose on Saturday and appeals as a filly who will be more about speed than stamina, so heading back to Aintree for the Grade 2 Nickel Coin would appeal as the obvious spring target. There is a chance that she could head to Huntingdon for the Listed Henrietta Knight bumper (6th December), but that would mean three relatively quick runs, and I would prefer to see her given time to recover from this, before being aimed at Aintree.

They just couldn't be split 😰

Having been pulled out at Newbury 10 days earlier, The Big Breakaway finally made his eagerly-anticipated chasing debut at Cheltenham on Sunday, and he made a hugely pleasing start. If you were to be ultra-critical, he shifted marginally to his right at times, but given that this was his first start over fences under Rules his jumping was very assured, and he won with plenty in hand. Given that he had to be shaken up with a circuit to run, it would seem that a more truly-run race will suit, and Robbie Power even suggested the possibility of coming back in distance after the race, to help sharpen him up with the bigger spring targets in mind. If he comes out of the race well, I suspect that he will be considered for Newbury at the end of the month – where there will be Graded options over 2m4f and 3m – whilst the Kauto Star at Kempton on Boxing Day seems the ideal mid-season target.

He could clash there with Enrilo and Dan Skelton’s exciting Shan Blue, but The Big Breakaway remains a horse of considerable potential as a staying chaser, and could easily develop into the leading novice this side of the Irish Sea. The Reynoldstown would be another good option for him in the build-up to the festival, where the race formerly known as the RSA Chase (still awaiting confirmation of the new sponsors) is the obvious festival target. He could face a formidable Irish challenge there – as the staying novice chase division looks potentially very competitive in Ireland – after which Aintree’s Mildmay Novices’ Chase should be right up his street, on a track which suits horses who jump well and like to be ridden positively. Native River (2016) and Lostintranslation (2019) won that race for the Tizzard stable in recent years.

I also wanted to highlight the runner-up Doc Penfro. A much-improved horse since joining Emma Lavelle last season, he finished a neck second in a very competitive Pertemps Qualifier at Warwick (Sire du Berlais finished 4th) on his final start, and he jumped soundly on what was also his chasing debut. Given his liking for testing ground, he should be more than capable of winning before too long, and I would be hopeful that he could end up in a decent handicap somewhere later in the campaign. If we were to get a soft-ground Cheltenham, the Ultima could even become a realistic option, if things go to plan in the meantime.

He had to be cajoled along at times, but The Big Breakaway, who is held in extremely high regard by the @colintizzard team, makes the perfect start over fences in the opener @CheltenhamRaces 😍 @Robbie_Power_

Marks out of ten for his jumping? https://t.co/3DhMbGolIS

The persistent rain in the build-up to the Greatwood Hurdle was far from ideal for Edwardstone, who I have been keen to see back on some better ground for some time now. He again travelled with his customary zest – whilst settling better than he did last season – and he remains on a mark from which he can land a nice prize, should connections persist down the handicap hurdle route. If he does, returning to a flatter track might also help and something like the Scottish Champion Hurdle could be a good spring target. Alan King, however, did state that he might send his six-year-old chasing after the Greatwood, and if that were the case, there should be plenty of options for him in the months ahead. His pedigree suggests that he wants further, and if he continues to settle better as he matures, that would open up more opportunities, although with his two wins over hurdles coming at Wincanton (beat Fiddlerontheroof and Flic Ou Voyou) and Aintree (gave the ill-fated Harry Senior 6 lbs), I’d still like to see him revert to a flat track. He could be another for Aintree come the spring.