Three Wesley Ward Runners That Can Win At Royal Ascot 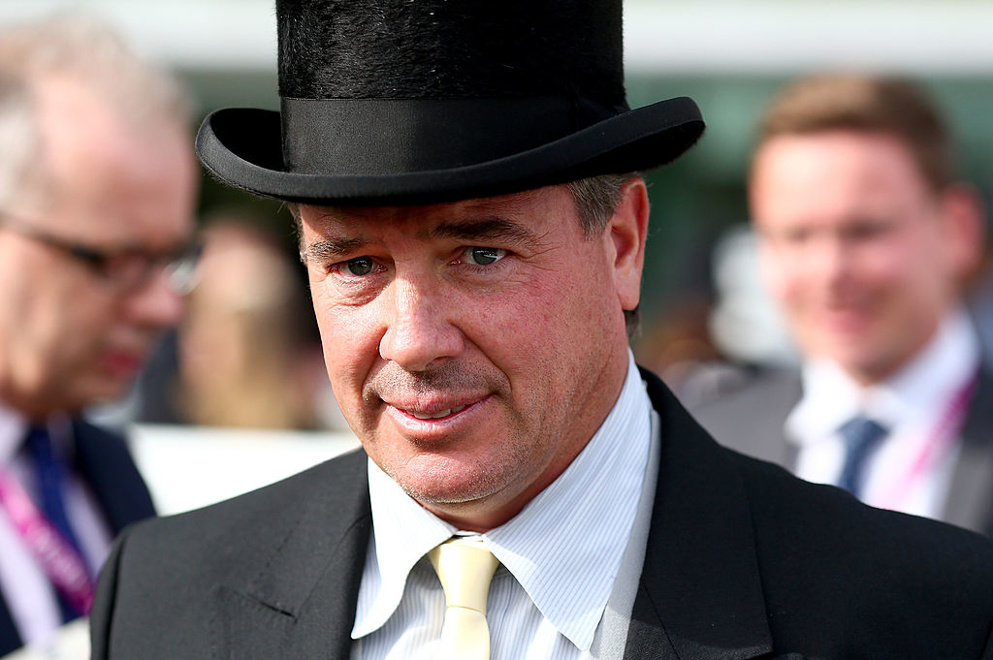 American trainer Wesley Ward is set to saddle nine horses at Royal Ascot next week, and Steve Chambers picks out three of them that can claim victory...

With a sparkling 11 Royal Ascot winners to his name, the globetrotting American trainer Wesley Ward has become a mainstay of Flat's biggest jamboree, and the likeable handler is set for another busy week at the Berkshire extravaganza next week, as he is set to saddle nine horses over the five days. As is the norm, Ward will have a plethora of speedy juveniles taking their chance, with seven of the nine set to be seen in two-year-old contests, but he will also have a brace of older horses with one in particular looking a major contender.

Much like his horses, Wesley Ward will look to fly out the stalls rapidly and bag a winner on the opening day of Royal Ascot, and in Kaufymaker he will saddle an exciting, speedy filly in the Coventry Stakes on Tuesday afternoon. Astonishingly, Ward is yet to taste victory in the Group 2 six-furlong event, but he feels he has a really strong hand in this year's event with KAUFYMAKER flying the flag for him.

The once-raced daughter of Jimmy Creed was a rampant six-and-a-quarter length winner on debut at Keeneland, and that success saw her propel to the head of the Coventry Stakes betting, and she could just prove to be a cut above her rivals. That Keeneland success came on the dirt, but Ward is confident that the switch to turf shouldn't be a problem, and she is pinpointed as his premier juvenile lining up at this year's Royal Ascot.

Ward is desperate to break his duck in the Coventry, and in Kaufymaker he feels he has a filly that can land a significant blow on the boys, and while the likes of Richard Hannon's Gisburn, Donnacha O'Brien's Masseto and the Aidan O'Brien-trained The Acropolis have all recorded taking victories heading into the race, it's the American charge that can reign supremie.

Ward has been quick to big up the chances of Kaufymaker, and has pointed out that if she can run a huge race then the rest of his youngsters should be watched, and the exciting two-year-old can scorch the Ascot turf on day one of the meeting and claim Coventry glory.

Since 2009, Ward has won the Queen Mary Stakes on four occasions with the triumvirate of Acapulco (2015), Lady Aurelia (2016) and Campanelle (2019) all claiming Group 2 glory in the five-furlong event on day two. The 53-year-old will now look to make it a famous fifth win in the Queen Mary and he will saddle a real speedball in the shape of TWILIGHT GLEAMING.

A spectacular debut performance at Belmont Park launched her into the Royal Ascot picture, as she breezed clear of inferior rivals on her first start on the track, and having recorded a quick time that day, she was immediately earmarked for a crack at the Queen Mary.

Will she be on the plane to Royal @Ascot? https://t.co/mcNEM4Sp36

Bookmakers have a differing opinions on how good Twilight Gleaming in as one firm is offering 11/4, while there's some 4/1 available, and the latter of those prices is significantly eye-catching, as the manner in which she showed a fine turn of foot in her win last suggests that she could be the next star five-furlong performer off the Ward production line.

It had been suggested that exciting speedster Ruthin would line up in the Queen Mary, but she is set to be rerouted to the Windsor Castle Stakes, as Twilight Gleaming has surpassed her on the gallops, so with that in mind it's worth keeping an eye on Ruthin.

But, in Twilight Gleaming, Ward has another hugely exciting filly to go to war with and she dominates the betting, at the time of writing, with the next horse in the list hovering around the 8/1 mark.

Having tasted Queen Mary Stakes success 12 months ago, three-year-old sprinter CAMPANELLE is set to return to Royal Ascot this year and is a leading contender for the Commonwealth Cup, which takes place next Friday afternoon. A winner by three-quarters-of-a-length in the Queen Mary, where she beat Sacred, Campanelle then went on to beat the boys in a sensational performance in the Prix Morny at Deauville.

Unable to land a blow in the Breeders' Cup Juvenile Fillies' Turf when she could only finish fourth, Campanelle struggled to show her best in that one-mile contest in America, so a drop back to six furlongs should see her at her very best next week.

Her Prix Morny success came over six furlongs, and she looks to be a real out-and-out sprinter, and the current 5/1 on offer looks more than fair for a filly that has been there and done it.

Pitched on the outside of the field during the Queen Mary, Campanelle managed to unleash a blistering turn of foot in the final couple of furlongs to storm to the front, and she will look to emulate that display in the Commonwealth. Likely to try and gain cover and get a tow into the race, Campanelle can duly unleash her customary turn of foot to put the race to bed in the last two furlongs, and she can hand Ward a third winner of the week.

Royal Ascot Tips: My Nap, Lay and Big-Priced Selection at the Royal meeting
By Steve Chambers

Steve Chambers picks out his nap, lay and big-priced fancy for Royal Ascot, which takes place next week over five…

Steve Chambers picks out three horses that ran over the weekend, who could go on to run well at Royal Ascot in…

#Ad. 18+ Playsafe. Promo code RACE35. New customers only • £10 deposit using promo code • Minimum stake £10 at odds of 1/2 (1.5) • Free bets credited upon qualifying bet settlement and expire after 7 days • Free bet stakes not included in returns • Deposit balance is available for withdrawal at any time. withdrawal restrictions & Full T&C’s apply.
get offer
Bet £10 & Get £50 Free Bets +100 FS On Casino (Mobile Only)
#Ad. 18+. Play Safe. New customers only with promo code G50. Place an initial bet with a minimum stake of £10/€10. Mobile only.  Prize is five free bets worth £10/€10 each and 100 free spins to play on selected games. Terms and conditions apply. 18+ begambleaware.org
Welcome Offer
#AD Open Account Offer. Up to £100 in Bet Credits for new customers at bet365. Min deposit £5. Bet Credits available for use upon settlement of bets to value of qualifying deposit. Min odds, bet and payment method exclusions apply. Returns exclude Bet Credits stake. Time limits and T&Cs apply. The bonus code ‘100BET365’ can be used during registration, but does not change the offer amount in any way. 18+ begambleaware.org.
Bet £10 On Horse Racing & Get £70 In Free Bets
#Ad. 18+ Playsafe. Bet £10 on any Horse Racing (11th - 14 June) – Get £70 in racing free bets. (£20 on bet settlement and £10 Daily for the full duration of the Royal Ascot Festival (£10 x 5 days). Only deposits via cards or Apple Pay will qualify. Free bets will be awarded after the qualifying bet has been settled. T&Cs apply. 18+ begambleaware.org
Bet £10 Get £30 + 60 Free Spins
#AD New UK & NI customers only. Promo code SPORTS60. Deposit and place first sports bet of £10+ in one transaction, at odds of Evens (2.0)+, settled within 7 days. First bet must be on Sports. £30 in Free Bets credited within 48 hours of bet settlement. 7-day expiry. Payment restrictions apply. SMS validation may be required. Max 60 Free Spins on Justice League Comics. 7-day expiry.  Full T&Cs apply. 18+ begambleaware.org
Bet £10 On Horse Racing & Get £60 In Free Bets
#Ad. 18+ Playsafe. Min stake £10, min odds 2.0 (Evs). Only deposits made using Cards or ApplePay will qualify. Free bets valid for 30 days, x1 £30 free bet awarded at bet settlement, x1 £30 awarded at 10am Tue 15th June. T&Cs apply. 18+ begambleaware.org
Bet £10 Get £20 + £5 Free Bet For Every Goal England Score v Scotland
#AD New members. £10 min bet on sportsbook at 1.5 min odds placed and settled before kick-off of England v Scotland on 18/06. 2x £10 Free Bet Tokens, accept within 7 days, valid for 7 days from  acceptance. Extra £5 Free Bet Token per England goal against Scotland valid for 7 days. Click here for Rules. Bet Responsibly. BeGambleAware.org 18+.
Bet £10 Get £40 In Bonuses
#AD 18+ new customers only. Deposit, opt-in and place a £10 qualifying bet at odds of 2.00 or greater within 7 days of opening a new account; excludes cashed out bets. Receive 3x £10 Sports Free Bets, valid on set events only at odds 2.00 or greater. Plus, a £10 Game Show Bonus, selected games, wager 40x to withdraw a max of £250. Bonuses expire in 7 days. T&Cs Apply, see below. Please Gamble Responsibly. 18+ begambleaware.org
Bet £10 Get £20 In Free Bets
#AD Min stake £10. Min odds 1/2 (1.5). First bet only. Free bets expire in 7 days. Cashed out bets won’t apply. Payment method restrictions. Online UK customers only. 30 days to qualify for £20 in Free Bets. 18+. T&Cs apply
Money back As A Bonus Up To £40 If Your First Racing Bet Loses + £10 Casino
New customers only. 18+, BeGambleAware.org. Min deposit £10. Money back as bonus. Wagering requirements: Racing 3x at min. odds of 1.40 (2/5), Casino 35x. Only one bonus can be used at a time, Racing bonus must be wagered before using the Casino, unless the bonus has been forfeited. Bonus will expire after 7 days of opt-in. #ad
Advert Disclaimer
Horseracing.net is a free online resource which endeavour to provide helpful and useful content and odds comparison to its visitors. Please be advised that Horseracing.net accepts affiliate commission from the companies appearing on the site, and agreed commission levels impact the location and order in which the companies (and/or their products) are presented on the website. Any ratings that appear on this site is determined by our subjective opinion of the brand but also based on market share and reputation, each brand's conversion rates, commission paid to us and general consumer interest. Company listings on this page don't imply our endorsement. We do not feature all providers on the market. Except as expressly set forth in our terms and conditions, all statements and warranties regarding the information presented on this page are disclaimed. The information, including odds, which appear on this site is subject to change at any time. 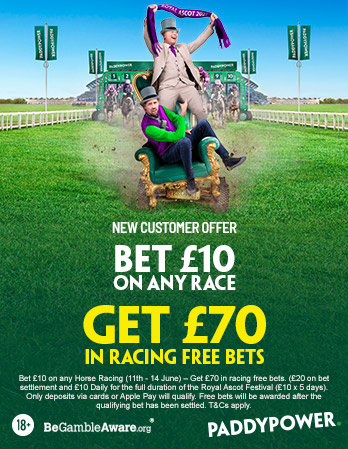